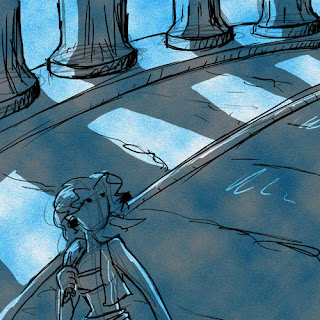 The carvings and paintings went on, after that, but it's depiction of the city became more unfamiliar to Amythra. Every Mume and Womume was taught the origins of their capital, Annalow. The rest of the history, not so much. Amythra thought of Jerrow's founding almost 1,000 years ago by Mume explorers. She was stock of the original founders, tho not to the point of nobility.

To pass the time while walking, she marveled at the talent in the carvings of Annalow's history and recognized some of the more legendary events, such as the Immortal Red Maid Carr'dine, hero of Annalow 200 years ago who lead the response against the Ipskin invasion. Or the strange Sitting Protests against the altered history of the City centuries before that.

Halfway up the ramp, the murals stopped to be continued with blank walls and unhued stone awaiting other great events to be immortalized in the city's entrance. It also hadn't occurred to Amythra, but the number of city guard that must have been there to protect the history thinned out out significantly after the carvings stopped.

After another hour's passed she finally saw the sky's light in the ceiling above the curving ramp and the cavern opened up to the proper city of Annalow.

The noise of the city was something all together new to Amythra as the volume inverse to the closing distance. Great Goddess, it was loud up there.