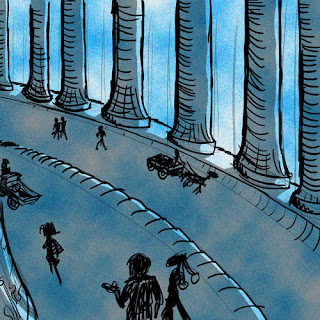 Before entering the ramp area, Amythra was stopped by a guard who asked her some basic questions. He remarked she was an islander and warned her that she was not to carry any blade longer than her hand's width from thumb to pinky. It didn't matter, anyway, as she wasn't armed. A pat on her shoulder later and the mume sent her away only to busy himself with another entering the ramp area.

The climb up from the docks was as mind boggling as the docks themselves. It came in the form of a ramp that spiraled around the west side of the impossible plateau all the way from the bottom of the north side around to the top of the south side, which was the main entrance of Annalow to begin with. The angle of the thing was steep enough to make the climb efficient, but low enough to make it bearable. It's center was a larger bump separating the left climb of many caravans, carts, and travelers, including Amythra, and the right side on which descended just as many.

As she climbed, she saw that right wall was cut into huge pillars windowing cerulean sky as primary light source, tho lamps also hung from the pillars close enough to the road to illuminate what the sky missed. On the left wall of the ramp was covered in carvings and murals depicting the history of Annalow, some of which was not unknown to her.