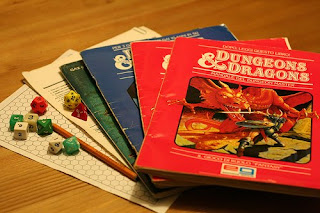 I'm currently at a bad writer's block for Amythra, so instead, let's take a week to remember that Annalow is a setting meant for RPGs. I study the theory to many games and their strength and I'm somewhat familiar with Pen and Paper RPGs as an art form as it's pretty close to my own territory of Comics. Stay with me as I explain.

I've been trying my damnedest to keep in the loop of newer RPGs that have come out today by listening to the reviews of Kurt Wiegel or monologues of John Wick with earnest interest. The unique genre of games that is RPGs I would sum up in one bold sentence:

The director sets the stage and each player plays by their own script. The dice are to keep things fair (tho Annalow uses a diceless system simply because I'm not a fan of frustrating wiffing. [For the unattuned, Wiffing is when by long odds, you fail at a task] Even so, there are rules and numbers involved with the Active Exploits Take Two system I keep in mind when designing parts of Annalow.) They're just there as rules of Improv to keep everyone grounded in one setting. After all, Zeus wouldn't hang out with a group of mortals trying to become gods, so power is limited. It all depends on the kind of story you want to improvise.

If each medium of story telling has it's advantage, RPG's would be interaction between players and director, because there are rarely props on the stage. A player tends to get drawn into the world, imagining the details left unspoken by the game master and other players. Here's where comics and RPGs align.

Comics is my favorite art form because of the necessary interaction needed from the reader. The magic of comics has always been between the panels, where the punches are thrown, not landing, and the character enters and leave in a way the reader chooses. It's difficult to put into words, but there is imagination being used on the part of the reader more than in any other. The same is true of books, but comics have fewer and greater details involved where time is malleable. If RPGs shine because of involvement, Comics shine because of it's use of time and closure.

I admit, these are the observations of someone who's been out of the gaming for a long time. I haven't RP'ed since...Gosh, 2007.

For the rest of the week, I think I'll try to sum up my wishes and designs for Annalow as a game and see if we can't find some foundation to build on.