viii. Before she was a Goddess 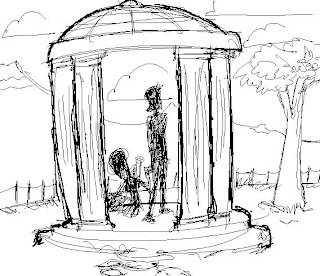 Me and my quasi-brother, Little Mike, would come up with stories and generally bullshit around. We both had our fictional countries on our fictional world called Terra, and each had our tales that took place in our countries.

My land was Randoria and I wasted no time coming up with Gods to rule and rule over. Gods, of course, need origins, and this one was Mandra's:

In Southern Randoria, near the Banishment Zone, there was a house where twins were born to a wealthy family. They were Mandrake and Mandra. Mandrake was given attention and pride, trained to be the best fighter and wisest strategist. Mandra was ignored or beaten, to be hidden from public or locked in the basement.

Late at night, in a near by gazebo Mandrake and Mandra would talk. Mandrake would defend his sister, and she loved him for that, but they were young and had little power over Mother and Father at the time.

Finally, when both were of age, Mandrake knew he must go to war, but would not leave his sister unattended by his parents. So at the gazebo, he told Mandra of an abandoned barn nearby and a way she could escape her parents. He would not be there to defender her, but she would be free.

After the war, Mandrake returned, with word from his sister that she would wait for him at the Gazebo. Many year have passed, and the two had not contacted each other for all that time. From Mandra's letter, Mandrake thought she was ready to confront their parents for their injustice against her, but would need him for strength.

When he returned, it was not at their meeting place he found Mandra, rather she waited inside their family home, covered with the blood of their parents. She spoke only to say they were both free, then turned her bloody affections onto him, as lover and not just as sister. He refused and left disgusted, but she was never detour away from following him as a prospective mate. Only in her second incarnation did she quit him.

In the time they were separated again, Mandrake amassed an army of soldiers under his commands and eventually worshipers as a great leader. He became his own God, teaching wisdom in battle. Mandra amassed her collection of the mad, the lost, and the abused. She was known as the Goddess of Evil and Innocence.

Mandrake was, of course, my avatar at the time, being a plant I once read from a spell book that came with Ultima IV by Origin. It made sense to me to have a female counterpart, tho I'm slightly embarrassed the most original name I could pop out was the same with only the last two letter's chopped off. I thought I was more clever than I was.

At this point, Mandra did not talk to me.