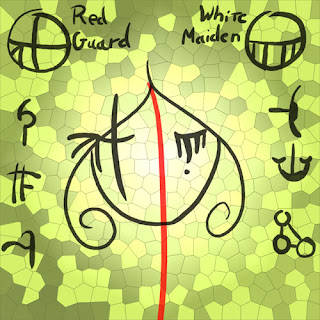 After her second Childhood, Mandra really became a force in my life. I started noticing little things leaking out that she would say and I wouldn't, but never let on. As far and anyone else was concerned, it was Mike just being random like Mike always was. The stranger parts would be when I found drawings or letters on the computers I don't remember creating. And, of course, the best way to render her voice was in drawing since that's what I do.

Somewhere in the world there is a sketch book I sold that has conversations between me and Mandra. Other voices surfaces, but none were as loud as the Living Goddess. The two other main voices are Mr. Brimstone, a force for wrong, and Adria, the forgotten Goddess of Forgiveness. I think my friend Rick once called them a "trinity thing," but that didn't take in account my own voice. I was, after all, God of my own mind, so I was the "Pentis Devinis" (my own words for over-God) and they were the Sub-Devinis (four voices).

Also, at the time, I was experimenting with mental processes such as Memory Palaces and such. My palace was called the Church of Notes where I stored music that I can remember even to this day. At the front of the church, above the altar and beyond the pews, was a statue of Mandra made of wood sprouting 8 arms. Each arm held a specific sign I attributed to one of the 8 virtues of the Avatar. This'll be important later on.

It was also this time when she started making deals. Mandra adores the idea of trade. Lifetimes for everything. Sacrifices for wishes. Cosmic Tit for tat. I could tell plenty of stories about the lives she's changes for one reason or another; A woman giving up all her worldly goods for the true love of her life or Two lovers who leaped sit under a tree in exile, lost but happy. This also became important later on.

Each of us had a headquarters, a home in the head, that represented our individual philosophies and sense of humor in godly fashions. I had my Church of Notes. Brimstone had a cathedral built of agony where the worse torture came to life. Adria had her garden and greenhouse growing questions she fed to her "Y-Bird" Kass Kass. And Mandra? She had a tower of Ebony.