An Update on Style 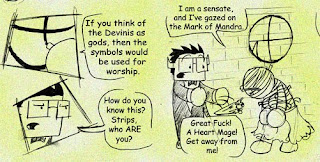 We need structure, and tho you may have guessed there is a color code to my updates, there isn't a good structure for story telling or world building, so here's what I will try for the next month and see if it works, eh?

Monday - Friday will be Story time. Once I finish with the story of Amythra's travels, we'll move onto another story, probably one about Spuni the White Maiden. Maybe some political intrigue. I don't know.

Saturday and Sunday will be World Building updates as I give hints, lost letters, and explanations about the world Mash'ta that Mandra and I have built. It's wholly complicated, right now, especially in the political front of Annalow, which if you haven't guessed, is a republic city-state half run by the Church of the Living Goddess. Lul, I don't know what I'm doing.

My ultimate goal is to make a useful world for Roll Playing, tho Mandra's designs were purely around her city. We've discussed it at length and both decided a campaign setting would be a good way for us to flesh out the world and leave it open for others. If you're interested, the RPG will be based on Active Exploits Take 2, by Politically Incorrect Games.

These changes will start tomorrow with Amythra 12 and we'll see what comes of the future updates. Hopefully, I'll be more dedicated in my consistancy. I know my record this year has been pretty poor.

[note: The comic is a clip from Crystal's Hell, a comic I did about 2 or 3 years back]