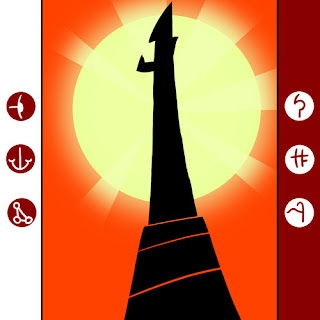 The tower was built of ideas and lives, missing puzzle pieces from games and magazines, and a strong sense of irony. A collage made of memory chucks with held sensation, the tower stands an unspecific distance into the sky, at least noticable on the horizon from three miles away. There are, according to Mandra, 7 senses humans have and she packed in everything she could think about them in this tower. "Ebony" is a joke she told that no one got, because no one heard it. It's not made of ivory, you see. At the base and beneath is the proverbial dungeon for tactile sense, an input Mandra said was the basest of human stimuli, and at the top, where she lived, was emotion, the only reactive sense.

Here she spun stories that became reality, and tho the world she inhabits is said to have the tower built in it, what actually happened was the world was built around the tower. It was a seed that birthed her world, Mash'ta, holding with in heaven and hell. Dichotomy, once again. Mandra LOVES dichotomy and her stories reflect this.

The tower has worshipers above and below split into two groups; The White Maidens and the Red Guard. They are the priestesses and military respectively, all women. I asked Mandra why the one sex and she said women take the time to feel (whatever that means. I'm not even sure if that's a reflection of my sexist thoughts or hers. A frequent problem).

Each group practices three principals (six total). The White Maidens govern Empathy, Equivalence, and Sum. The Red Gaurd embraced Control, Tactics, and Priority. These words are mine, not hers, because each of those principals revolve around sensation and inner freedom. Mandra, if I let her loose at the keyboard, could and would write a novel for each of these six words.

Example: the concept of Tactics in a sensual meaning could be about the plans one holds on their next meal, their next sexual partner, or the next book they read. It's more about digging deep down to discover one's true wants and not just the short term desires of day to day living. Want always exists, even if it's want for no want. If life is a collection of symbols and memories, then picking and choosing our desires is as important as remembering our experiences, both good and bad. There's more to it, but that's enough for now.

I'll go into the Principals more if you really want, but not right now.