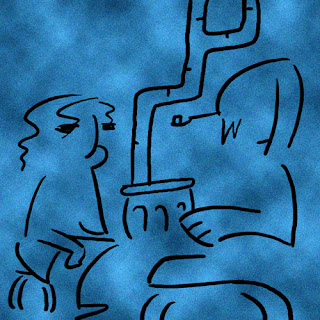 Amythra rolled her eyes and sat down. "To be honest, I really don't want to go. Just no one else will."

"Oh, it's not so bad, there. You'll see more fellow Mumes than yer used ta' seeing, for sure." More eye rolling. "Trust me, lass. It'll be worth it. So," Crate puffed on his pipe, "what happened this afternoon? You were sore."

"Well, if it doesn't matter..." Crate took another puff of his pipe and kicked open the front of the stove. He let the quiet hang in the air a while, watching his friend sulk. Either Amythra was sulking, or losing a staring contest with his broken floor. "I s'pose it's got nothing to do with yer trip, eh? I heard your brother'd be with on the ship to Annalow."

"I don't wanna talk about it." She looked up. "I don't suppose you could come with me?"

Crate chuckled and flicked one of his long dangling ears. "My slave rings been off for a long time, lass. Ever since I became a sailor. No, I'm done with the great city." He playfully poked her with the end of his pipe. "But no fretting, 'hear? It's a Mume city and you'll be taken care of more than you know. If you get into trouble, look to yer kin. You'll be fine. Now," he jammed the pipe back into his mouth and puffed calmly. "Tell me about your brother."

"No, jus' stupid. He's just going off to die, is what he's doing and father doesn't care!" She threw up her hands and growled.

"Burret not care? Ha! Have ya talked about it with Marvate? T'was his decision, after all."

"No. And it's a dumb decision, but he's so thick brained! I bet you harpoons would just bounce off'a that skull of his!"

"Aye. Thick...or he just thinks it's right." Crate puffed some more. "Don't hold back, Amythra, m'lass. You'll be on a boat with him for at least a day's travel. Tell the idiot he's wrong and see what he does. Who knows?" He chuckled. "The blasted idiot may see sense. Or you."

Amythra quickly turned the conversation toward the new ship she saw at the harbor and they drank leaf-juice while talking about it. In the end, Amythra slept with brow unfurrowed, but still angry at her brother.